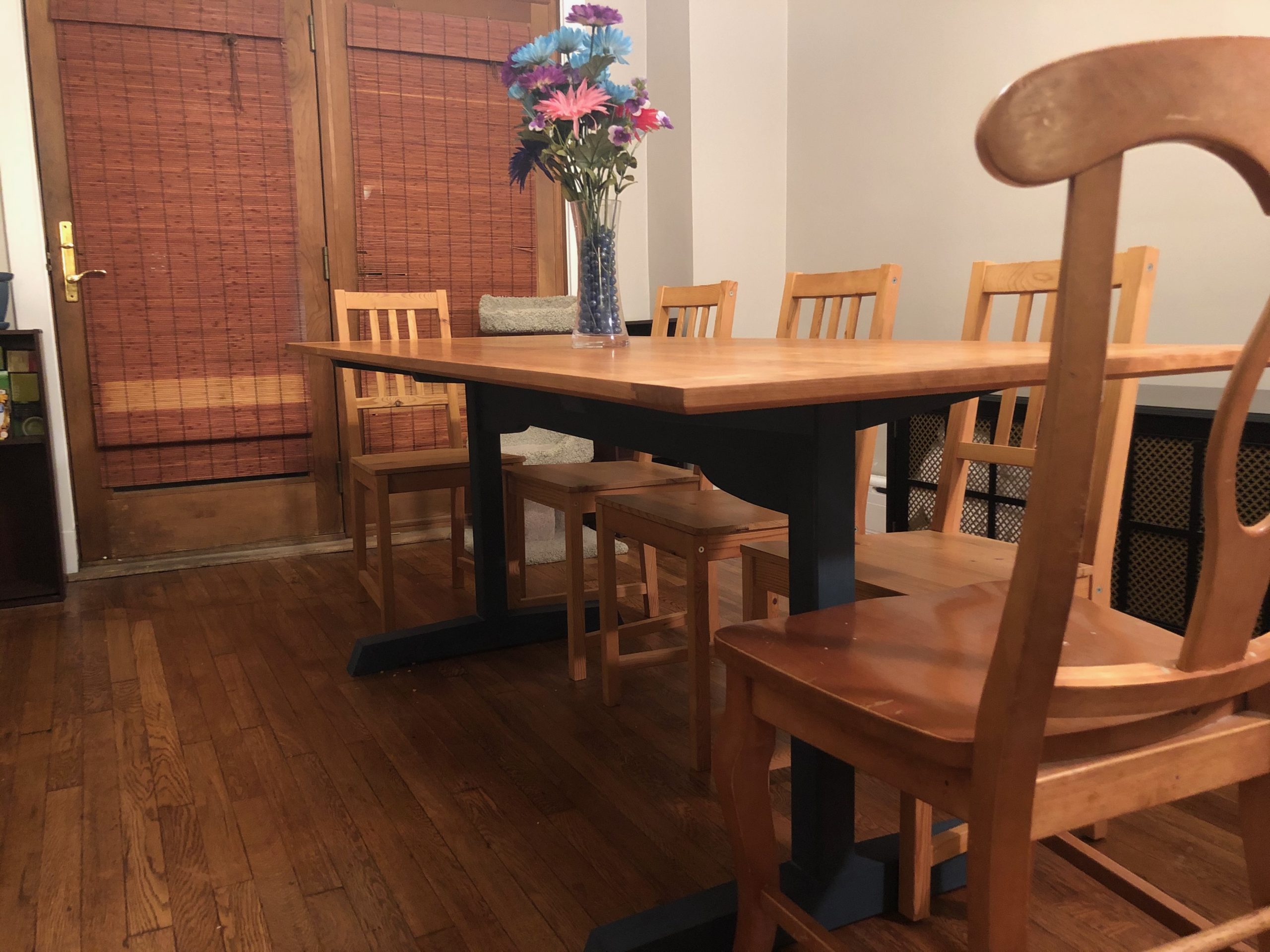 The stretcher tenons have been fitted and cut and the mid-brace has also been cut and fitted. The stretcher had already been face jointed and thicknessed when I ran the parts for the legs through the machinery. A quick check with a straight edge and winding sticks revealed no movement over the intervening few weeks.

The next step was to edge joint the strecher and rip it to width. While my powered jointer works well for shorter boards, this five foot board would be a bit of a challenge to get perfectly flat. That meant going to the workbench with my Union #7 jointer plane. I picked this plane up from eBay a few years ago and it has worked very well since then. There is definite pitting across the sole of the plane, but it has not affected the quality of cut or ability of the tool to function. A quick trip to the sharpening stones and then I look some wonderful shavings, getting a nice clean, flat cut across the full length of the edge. With one edge jointed, I then ripped to width on the table saw.

The next step was to lay out the tenons. Once laid out, I decided to try a couple of different ways to cut them. I cut the first tenon cheek with hand saws. Cutting the shoulder fairly easy. However, ripping down the face of the tenon cheek was a bit too difficulty. The tenon is 3 inches deep and 2.5 inches wide, so it was a bit too much to cut I cut the first tenon cheek using hand saws. I ended up straying from the line. After paring the tenon with a chisel, I moved to the table saw for all other tenons.

This post has been delayed a few times. Since I started it, I’ve moved to final glue up for the base.

The table top was glued up. When squaring it all up, I had some gnarly blow out from the router. It tore about a nine inch long piece off one edge. I was able to glue the piece back on, but eventually had to scab a small patch onto the edge. I decided to add breadboard ends. This is the first time that I’ve made breadboard ends. I started by cutting one long tenon on each end of the tabletop using a router, a clamped straight edge, and a straight bit. I then milled a groove into the edge of the breadboard using the dado stack on the table saw. The throat plate on jobsite table saws has some flex, so I cleaned it up with a plow plane to ensure that it was the same depth along the full length. I then marked out and cut three individual tenons into the ends of the tops, leaving a haunch that is as wide as the groove is deep. The breadboards were then placed on to the tenons so that I could mark the extends of the mortises. This was mortised by hand. Once everything seated acceptably, I marked locations for peg holes. These were drilled out on the drill press. The breadboard was then put back into place to transfer the locations of the holes. The holes in the outside tenons were drilled out and made oblong to allow for wood movement. Hide glue was used only for the center tenon on each end.

All that is left is to clean up the top, cut the buttons, and finish it all. We’ve decided on a Soldier Blue milk paint for the base. After a few coats of milk paint, I’ll top it with paste wax. The cherry top will receive Tried and True Varnish Oil. More photos to come later.

I’ve been meaning to build a new dining room table for our house since we moved in last year. A quick look at my /Now/ page showed that I bought the lumber for the base back in May. (It also shows I should probably update the /Now/ page.) It had been roughed out and stickered in the basement since then. Back in July, I made a trip out to Keim Lumber in Ohio and bought 5/4 cherry boards for the top. With Thanksgiving fast approaching, and plans to host at our house, I really need to buckle down and get this table done.

The plan for the table is based on a design published by Chris Schwarz* in Woodworking Magazine. The base of the table is made from yellow pine. The top will be made from cherry. After deciding that it had acclimated long enough, I started the process of milling it down on Friday, Sept 27, giving all of the boards a pass on the jointer until flat and then a light pass through the planer. They were then left to sit until Sunday the 29th.  The legs, braces, and feet were then milled to final thickness, and the mortises were cut in the feet using a dado stack on the table saw. These boards were then glued up.  The same procedure was done for the legs. The braces did not require any dados at this point.

As of yesterday, I had cut tenons on both legs and fit them to feet. I tried this by hand on the first leg with not horrendous, but unacceptable, results. The leg ended up snug but significantly twisted in the mortise. This was remedied by moving the operation to the table saw. I squared the tenon up using the dado stack and then glued on pieces to replace the previously cut away wood. This sat clamped overnight and I re-cut the tenon faces using the table saw again today.

In the meantime, the tenon was cut on the second leg via the table saw. I also took the opportunity to cut the bridle joint in the top of each leg using the band saw and a chisel, as well as cutting the mating piece in the braces using the table saw and dado stack.

By using the table saw, I got piston-fit joinery without too much hassle. At some point an upgrade of the table saw is on my list, if I think that the shop can stand losing the space to it. I’ve been working on a Ridgid R4513 jobsite saw for the past few years. I find that the accuracy of the saw, including blade tilt and height as well as fence accuracy just aren’t a great quality. That said, the saw folds down to save space, and in a 9 1/2′ x 18′ space, every inch that I can save helps.

Now on to shaping the feet and braces, and cutting the tenons on the stretcher.

* I have built a number of pieces that Schwarz has written about/researched/designed/built. I think this is a function of a few things. First, he is a prolific publisher. Seriously, the mere volume of written word on woodworking that he has put out there means that you are likely to find some piece interesting that you’d want to build or technique that you want to try. Second, the writing is amazingly accessible. He’s concise, but descriptive, easy to read, and amusing. Finally, the styles and techniques that he writes about are what grab my attention. Let’s face it, everyone has different tastes things, be it furniture, music, art, clothing, etc. In terms of furniture, I’ve now read, and own, three of his books (Campaign Furniture, The Anarchist’s Design Book, and Workbenches). I reference these books constantly in the shop and have found the styles of furniture that he gravitates toward to be the same style that interests me.